I thought I’d share some random pictures and a few thoughts about life around here.

The coolest thing: I met with some graduate students from Taiwan. One of them contacted me because she had read both of my books on social anxiety disorder and was going to be at the University of Missouri for a cultural exchange program. She wanted to interview me for a class project. I hope to write a whole post on this–it was so, so neat. She had brought her Chinese edition of Painfully Shy, all highlighted, and wanted me to sign it. She said it was a miracle that we met, and asked for a hug when we said good-bye.

An interesting tidbit: They all said that being quiet in Taiwan was revered. It was the shy, quiet students who were popular and who were selected by teachers to be class presidents. It sure was confirmation of this research study.

Real Life: Greg sitting in the recliner, holding Larry up like a baby, shoes on the floor, stuff all over the counter-tops, and me being sneaky taking pictures.

Lots of Walks: When I feel sad about all the things I can’t do with my chronic pain, I remember that there are lots of things I can do, like take walks around the neighborhood. The sunsets have been gorgeous.

Life Make-Over Fail: Greg says I sound like a walking women’s magazine. I’ve been talking to him for at least a month that after baseball season was over (our St. Louis Cardinals were in the World Series) we were going to have a “Life Make-Over.” We were going to watch less TV, eat better, exercise more, spend less time on the computer… It was all supposed to start on November 1. Well, we did horribly over the weekend.  Greg watched LOTS of football (but to be fair, he didn’t feel well). I even told myself I wasn’t going to eat my nightly ice cream, but I did. We didn’t exercise.  This is why you should never try to start things on the first of the month or on a Monday. It feels too much like a diet and instant rebellion kicks in. 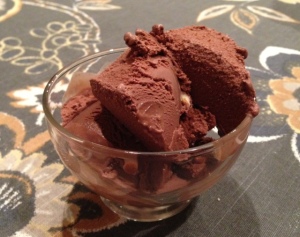 Funny: Larry looks a bit like Einstein. They both have the static hair thing going on.

5 thoughts on “Around Here Lately”