I gave away all my scrapbook things. We’re talking everything. New albums. Paper. Pens. Stickers. Funky scissors and rulers. It was really difficult, but it was time. My fine motor skills have gotten worse, and scrapbooking greatly exacerbates my pain.

I’ve been a serious album maker for many years. I got my first stash when our son was a baby. I went to a Creative Memories show and came home with $200 worth of supplies. Back then (well, even now) that was a lot of money. I came in the house and Greg said, “You’d better use that stuff.” I stayed up late that night making my first scrapbook of our son. Since then I’ve made holiday albums, sports albums, ABC albums, quilt albums, heritage albums, everyday happenings albums, anniversary albums, celebration albums… So much time and detail. Every word handwritten. (Link to a cool song that is loosely related) 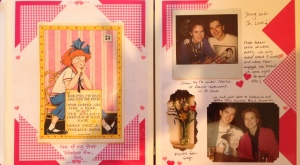 One of my favorite memories is walking into our family room and finding my then 10-year-old son and all his neighborhood friends (who all went to school together), gathered around looking at his Kindergarten album. Yes, I have an entire album just for Kindergarten!

It’s been a week and a half since I gave everything away, and I’m still a little sad. Greg has been super nice. I think some guys wouldn’t understand how hard this was. But he did. He also told me, though, that this was a way of taking care of myself.

I found a unique group of young women to give my things to–the “Groovy Girls Collective.” They describe themselves as “a community gathering place devoted to supporting, educating, and mentoring women of all ages, nurturing collaborative creators both locally and worldwide.”  (I may be giving up something, but if it has a world-wide impact, that’s OK with me.) One of my neighbors’ daughters is involved, and I contacted her, who said they would definitely like some scrapbook supplies. Here’s a few pictures from their Facebook page. 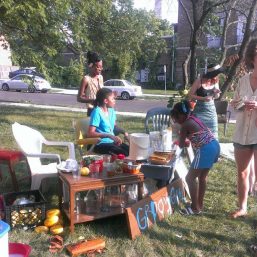 Although I’m sad, I’m also excited, as I can already tell these young women are having lots of fun and great things are happening. Maybe some of these pictures will end up in a scrapbook one day.

13 thoughts on “Every Word Handwritten”