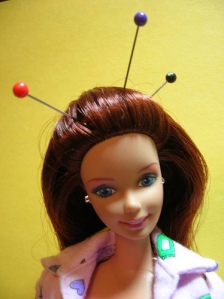 As I wrote about in a previous post, Befriending the Body, I’ve experienced pain on a daily basis for many years now. I’ve tried all the conventional approaches: physical therapy, steroid injections, and two back surgeries. For the most part, I’ve made peace with the pain and just assumed it would be something I would deal with forever. Yet there was always a nagging voice inside me that said I owed it to myself to explore more options.

I’d read some research on acupuncture, and there seems to be some scientific basis to support its use in chronic pain. Although I live in a fairly small town, I’d heard about a physician here who had trained with Dr. Andrew Weil, a well-known alternative medicine “guru” and best-selling author of many books on wellness. One of my friends had been to Dr. Christopher Link, and had taken her daughter to see him, too.  She gave Dr. Link rave reviews, and I decided it was worth a try. What did I have to lose?

Once I decided to go ahead, I waited four months to get a “new patient appointment.” I figured he must be good as it took so long to get in.  I’ve now seen him three times, and there are many aspects to my treatment plan that I’ll write about in other posts. I had my first acupuncture treatment last week, so that’s the subject for the day.

First of all, I had a mini-breakdown the few days leading up to the treatment. I worried about the financial aspect. This is all going to be an out-of-pocket expense. Am I going to be wasting my money? Mostly I worried it would be just plain weird. I had done some more research and found some people had emotional reactions to acupuncture. I talked to my friend about it and she did say that acupuncture can “release a lot of energy.” That didn’t sound like a good thing. When I hear stuff about “energy work” I get turned off. I also didn’t like thinking about the very real possibility that I’d cry somewhere along the line. Ugh.

I had worked myself up into such a state, I called to cancel the appointment, but the receptionist talked me out of it.

The night before my appointment, I meditated. An image came to mind of a picture I have hanging in my office. It has a quote on it that says: “Sometimes your only form of transportation is a leap of faith.” I don’t readily trust doctors, but I took this as a sign that I should give Dr. Link the benefit of the doubt.

At my appointment, he first came in and asked how I was doing. I offered a brief “okay” before I launched into a list of questions. I think I was mostly trying to prolong things. I thought maybe we’d run out of time. I even suggested that he was probably running late and we could do the acupuncture at my next appointment! Silly me 🙂 Finally, I asked, “Do I have to believe this will work for it to work?” He said definitely not, and then he told me about research studies with animals that proved expectations had nothing to do with acupuncture’s effects.  He shared with me that he had been skeptical about acupuncture at first, too, and he added that he didn’t know for sure whether acupuncture would help me.  I appreciated his honesty.

The actual treatment wasn’t too bad. As always, my anxiety ahead of time is much worse that the actual event. I didn’t want to look at the needles, but I’m pretty sure he put at least two in my ear and I’d say about ten in my arm and hand. Then a TENS unit was hooked up to the needles, and a heat unit was directed to my arm. I felt like I was a ham being baked.

Next a nurse put a call button in my hand. I asked, “What is this for?” She said, “To call if you need anything.” What? I was going to be left? I was doing okay until this point. I guess I had missed the part that the needles are left in you for a period of time. I was going to be in a room all by myself with needles buzzing away in my arm. The nurse asked if  I wanted some music, and I said no (music would be more likely to make me cry). I did ask for a blanket for my feet, which were freezing cold. I was proud of myself for being assertive and asking for the blanket.

During the treatment, I tried to do some breathing meditation. I imagined Sharon Salzberg’s voice from my meditation CDs telling me to simply notice the breath. I didn’t have to change anything–no need to try to breathe slowly or deeply. Just follow the breath in its natural state.  At times my attention was drawn to various points in my arm where the needles were. There was one place close to my armpit that was a little uncomfortable. Otherwise, there was no discomfort–mostly just  strange vibration sensations. I heard a timer go off and the nurse came back in. I imagined I was cooked to perfection. She said I looked flushed. She said Dr. Link had told her that was a good indicator that your nervous system was actually being reached. I didn’t say the room was just hot and stuffy, but that’s what I was thinking. She told me I could get off the table, but I felt a little bit paralyzed or something. She must have noticed an odd look on my face, and she said to take my time, that some people feel a little dizzy afterward. When I was telling Greg about it, he said, You were probably really relaxed.” I informed him that I was definitely not relaxed! (This was serious, scary stuff.)

I made it to the front window, paid for the treatment, and got instructions to drink a lot of water, and take it easy.

I went home and looked at myself in the mirror. Could I see any marks where the needles had been? Did I still look flushed? No, and no.

It was hard not to evaluate whether anything had happened. As pessimistic as I usually am, I actually thought I felt “more space” in my shoulder area. This experience of “more space” extended down my arm into my hand, and lasted all that day and the next day, too. I even forgot to take my Extra Strength Tylenol, which I take religiously.

Now if I could have only ended this blog post here.

A few days after that, the pain was back. I thought to myself, “Well, yeah, the first day I stayed off the computer–one thing I know aggravates my pain. Of course I felt better.” Even the second day, I was still trying to do less on the computer. “Maybe I just need to stop typing so much, then I wouldn’t need this stupid acupuncture!”

I didn’t expect one treatment to magically cure me. I’m going to keep going, at least for a little while. Dr. Link said we’d be able to evaluate after about 4 treatments what kind of response I was having. And I don’t know if it’s related, but I have slept really soundly since the acupuncture treatment.

As I’ve thought about this whole acupuncture thing, it dawned on me that it’s really not relevant whether it “works” or not. The point of this self-compassion project is to learn to be gentle with myself, regardless of the circumstance. Sure, it would be great to not be in pain all the time. But it’s not mandatory for happiness. Just two and a half months into this “project” and I already feel better equipped to deal with whatever life brings. Pain or no pain. It’s all good.